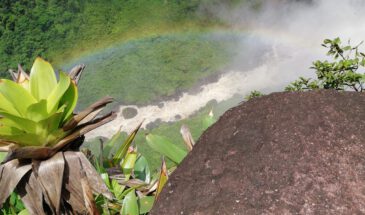 Kaieteur falls overnight trip: An unforgettable night at the Kaieteur nature park is worth having! This tour will give you that!

This overnight trip will take you to Kaieteur Falls, a breathtaking natural wonder on the Potaro River in Guyana. You'll learn about the legend and history of Kaieteur from local guides and get a chance to spot some of the local wildlife and bird species, flora, and fauna in the area. But, of course, you'll also have plenty of time to explore on your own—make sure you bring your camera! 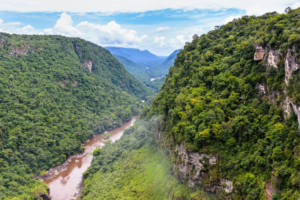 Kaieteur National Park occupies a prominent position in the centre of the Guyana Shield. The Guiana Highlands, or the Guiana Shield, being roughly 2 billion years old, is the Earth's oldest surface.

It is located in north-eastern South America and includes a large mountain plateau and rainforest system that is part of a vast watershed between the Amazon and the Orinoco rivers.

Specifically, it covers 30 000 square miles (75,000 square kilometres). It is bounded roughly by the Amazon River to the South, the Japur-Caqueta River to the southwest, the Sierra de Chiribiquete Mountains to the West, the Orinoco and Guaviare Rivers to the northwest and the north, and the Atlantic Ocean to the East.

One feature of the shield is its distinctive plateaus or table-top mountains, called tepuis by the Indians. These are the remnants of the sandstone sediments that covered the metamorphic rocks of the area and were created by erosion over 200 million years ago. These mountains range from 6,500 to 8,800 feet (2000 to 2700 meters).

Roraima is the tallest, at 9,219 feet (2810 meters). This area contains an estimated 20,000 different vascular plant species, of which 35 per cent are endemic, making it one of the three richest tropical wilderness areas. It also has the lowest human population density of any tropical rainforest region, consisting mainly of Amerindian cultures, making it one of the few places on Earth where all options for conservation are available.

Kaieteur National Park is in the heart of the Guiana Shield, in the Pakaraima Mountains region. This area is composed mainly of plateaus and steeply sloped escarpments and is noted for its many rivers and waterfalls, which drop off the edges of the escarpment. This majestic wonder, the centrepiece of the Park, proudly boasts being one of the most spectacular waterfalls in the world. It is located where the Roraima formation gives way to the lowlands and drops 741 feet (225 meters) to splash to a basin below; after that, it travels some 20 miles (32 kilometres) through a deep gorge before leaving the escarpment behind.

Kaieteur Falls had not changed significantly from when it was seen by the European explorer Barrington Browne in 1870. However, the outstanding natural value of the area was recognized by the British colonial administration who, in 1929, designated an area of the Potaro River, including Kaieteur Falls, as a national park covering 45 square miles (72 kilometres) with the principal purpose of preserving the natural scenery and the fauna and flora of the area. At that time, it represented one of the first conservation efforts within Latin America and the Caribbean.

The Legend of Kaieteur Falls

The name of the fall commemorates Chief Kai, one of the prominent chieftains (also known as Toshaos) of the once-powerful Patamona tribe. He committed self-sacrifice by canoeing over the falls so that Makonaima, the Great Spirit, would be appeased and save his tribe from being destroyed by a raiding party of savage Caribs.

"Teur" translates as "falls"&mdash; hence the name Kaieteur. Folklore has it that the old man and his "wood skin" canoe were turned into stone and now form part of the rocks of Kaieteur. Perhaps he won appeasement, for his name still marks the magical curtain of water known as Kaieteur.

The legend of the falls has been celebrated by generations of poets, writers, painters and musicians, most memorably in the "The Legend of Kaieteur", a choral fantasy by the Guyanese composer, Philip Pilgrim (1917-1944), set to the words of a children's epic poem by Arthur Seymour.

In this Kaieteur falls overnight trip, you will surely experience a night to remember for a lifetime!

Kaieteur falls overnight trip: An unforgettable night at the Kaieteur nature park is worth having! This tour will give you that!

This tour and prices are subject to availability.

Departure is every Saturday, and booking in advance is necessary.

Depart at 11:45 a.m. from your hotel/home for check-in. You depart the airport at 1:00 p.m. You will fly over vast rainforests and small patches of mining camps. Before landing, you will enjoy an aerial view of the falls, which allows you to take photos, so have your cameras out for that perfect shot!

At Kaieteur falls, you will meet our professionally trained national park guide, who will show us the great wonders at the falls. The tour includes hikes around the falls to various locations and areas where we will get fantastic views of the waterfall. You will learn about the

, see the poison frog living in large tank bromeliads and many birds, which you can find here.

Discovery the Falls/Return to Georgetown

At dawn, birding. Return to the Guest house for breakfast.

Enjoy a tour of the surrounding areas looking for the rarely seen Guianan Cock-of-the-rock and other species found in the park. 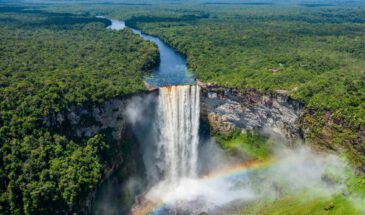 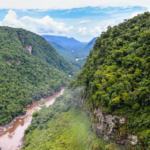