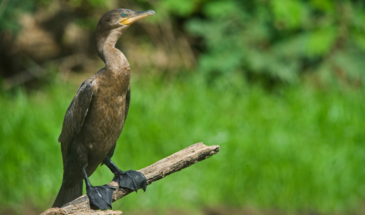 The Essequibo coast is an overlooked birding destination which accounts for more than half the birding population in Guyana. The Essequibo River is a golden paradise with many exotic resorts and lodges. This special itinerary focuses on river and rainforest birding in and around resorts and visits to the Georgetown botanical gardens and the Abary River—all undiscovered birding havens. Join us for this wonderful adventurous birding trip.

The Essequibo coast is an overlooked birding destination which accounts for more than half the birding population in Guyana. The Essequibo River is a golden paradise dotted with many exotic resorts and lodges. This special itinerary focuses on river and rainforest birding in and around resorts and visits to the Georgetown botanical gardens as well as the Abary River—all undiscovered birding havens. Join us for this wonderful adventurous birding trip.

The Essequibo coast is an overlooked birding destination which accounts for more than half the birding population in Guyana. The Essequibo River is a golden paradise with many exotic resorts and lodges. This unique itinerary focuses on river and rainforest birding in and around resorts and visits to the Georgetown botanical gardens and the Abary River—all undiscovered birding havens. Join us for this beautiful, adventurous birding trip.

On arrival at Cheddi Jagan airport in Guyana, you will be met and transferred to your hotel in Georgetown. In the afternoon, you’ll visit the Botanical Gardens looking for blood-coloured Woodpeckers, White-bellied Piculet and Snail Kites, Limpkins and Donacobius. Many parrots will also be seen including Festive, Macaws both Red-bellied and Red-shouldered, Black-crested Antshrike, and White-bellied.
Overnight at Sleep Inn International Hotel

We will travel eastward from Georgetown to look for Blood-coloured Woodpeckers and Rufous Crab-hawks. The woodpecker is only found along a narrow coastal strip, which runs eastward for just a few hundred miles from Guyana and finding this species will be one of our main priorities. We will also look for the poorly-known White-bellied Piculet, which can be spotted in this region. An area of mangrove trees less than 50 kilometres from Georgetown is an excellent place to find Rufous Crab-hawk, a species badly affected by the reduction in its habitat.

This is also a reliable site for the Woodpecker and Piculet, so we stand an excellent chance of seeing all three species. On our return to Georgetown, we will visit some mudflats where we will likely find a range of waders and the Scarlet Ibis, Black Skimmer, Brown Pelican and Magnificent Frigatebird.

Depending on the time of year, we may also visit a heronry where Black-crowned and Yellow-crowned Night Herons, Little Blue Herons and Cattle and Snowy Egrets breed alongside Snail Kites.

This morning we must make an early start driving west over the Demerara harbour bridge. Apart from being the coolest time to travel, it is also the best time to observe the Red Ibis and herons as they settle along the banks of the Demerara River. Depending on the tide, we will stop for some birding.

Our tour continues to Parika, where we will join a river taxi to Supernaam, a county along the coast of the Essequibo. From there, we continue by bus to the area of Main Stay, which will be our mainstay for 3 days/2 and nights. Upon arrival at Main Stay, you will have a chance to settle into your accommodation and learn about the resort.

An afternoon trip will be taken around the compound a short way from your cabins.

Main Stay resort is a well-established resort which caters for guests who wish to get away from it all. It is located on a lake ideal for water sports when the brilliant scorching sun is at its fiercest.

Travel from Anna Regina on a westerly direction to Adel’s Resort. You may be lucky to see the Scarlet Ibises, which adorn the shorelines of the Pomeroon River. This historical land was first settled by the Dutch in the 1600s when a small number of pioneers from Europe set up their first settlement. Many of them were small merchants and farmers who created a homestead for themselves along the river banks and traded with the Amerindian natives. Names such as de Freitas, Stolls, de Costas and Parkes are but a few of the descendants of the European settlers.

Adel’s resort consists of three buildings—the guest accommodations, the main building, where meals and entertainment are provided, and a building for conferences, dances, and other large gatherings. The rooms are well appointed and provide an eco theme complemented with furnishings and fittings that have been constructed from local woods and materials. Each apartment also contains a private balcony, twin beds and a bathroom. The all-inclusive accommodation includes room and meals.

Afternoon is spent at parrot Island where hundreds, if not thousands, of parrots come to roost. (Meals: breakfast, lunch, dinner)
Overnight at Sloth Island Nature Reserve

This morning you will depart Sloth Island for your tour of the village of Falmouth where some 200 Amerindians from the Carib tribe live. Most of the village women earn their livelihood by working at Sloth Island Nature Resort as maids and cooks while the men mine gold in the interior. Some of the older folks plant family gardens and make cassava bread. There is a church, a school, and a health center on Falmouth.

After the tour and some birding, we proceed further to Bartica and to Fort Kykoveral, which is almost 400 years old. We will tour this old Dutch fort, the Mazaruni Prisons, visit Baracara Falls and have an exciting ride along the rapids at Marshall Falls. We will also have an opportunity to enjoy a hike at Marshall Falls while looking for more birds, such as Green Oropendolas and Cinereous Timamous, Muscovy Ducks, Little Chakalakas, and Marail Guans. (Meals: breakfast, lunch, dinner)
Overnight at Sloth Island Nature Reserve

This morning depart for a flight to Kaieteur Falls which is situated in the heart of Guyana on the Potaro River, a tributary of the Essequibo. The water of Kaieteur, one of the world's natural wonders, flows over a sandstone conglomerate tableland into a deep gorge–a drop of 822 feet (250 meters) or 5 times the height of Niagara Falls. Kaieteur supports a unique micro environment with tank bromeliads, the largest in the world, in which the tiny golden frog spends its entire life and the rarely seen Guiana Cock-of-the-rock nesting close by. The lucky visitor may also see the famous flights of the Kaieteur Swifts or Makonaima Birds, which nest under the vast shelf of rock carved by centuries of flowing water, hidden behind the eternal curtain of falling water. Fly to Georgetown and transfer to your hotel for overnight. (Meals: breakfast)
Overnight at Sleep Inn International Hotel

Transfer to the airport for your flight home.